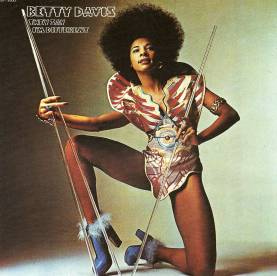 THE FEEBLE-minded walk out in disgust when Betty Davis wiggles her tush at them, the weakhearted go limp with despair while the lusty ready their ...

Betty Davis: Betty and the Boops

"I'M SCHIZOPHRENIC!" says the voice on the end of the transatlantic cable. ...

The ex-wife or Miles Davis is now making it on her own account. Robin Katz reports ...

IT'S FUNNY how some women are genteel yet others may be quite the opposite – yet still manage to retain their femininity. ...

WITH THE Viking Warrior Case fresh in every mind, punters packed Ronnie's for the Betty Davis exposure. A threat to the moral health of the ...

THIS IS IT funk y'allThis is it right hereThis is it do ya hear me girlsAnd well they can't do it forya no nastier than ...

ON HER FIRST two albums, Betty Davis staked out a peculiar brand of kinky, tongue-in-cheek funk that garnered her a cult following in Philadelphia and ...

Betty Davis: The Put-On Who Puts Out

A WOMAN stalks the ruins of what was once a stage. She prowls it relentlessly, legs wide apart seeking out hapless victims in the audience. ...

Intro: I think I’m the only journalist in about 20 years to have tracked down and interviewed Miles Davis’ now reclusive ex-wife who was an ...

Betty Davis: She's Gotta Have It

ONE EVENING during the high summer of 1967, the fragrant Miss Mabry left her Greenwich Village apartment situated in the S&M area of Bedford Street. ...

Rise of the Funky Divas

IN A MUSIC world in which no one disappears, and even the most negligible figures can be persuaded to break their post-fame incommunicado isolation if ...