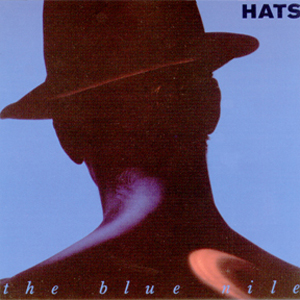 WE'VE BEEN IN ALL sorts of places for a couple of years, just meandering around the world on a fairly frugal basis – America, Italy, ...

Paul Buchanan and Robert Bell on the lengthy process of recording their second album, Hats, and about musical purity versus commercial acceptance.

The Blue Nile: Source of the Nile

Interview by Sandy Robertson, Sounds, May 1984

The Blue Nile: I Can See For Niles

Profile and Interview by Richard Cook, New Musical Express, 12 May 1984

BECAUSE DELICACY and good manners are so disgustingly commonplace in today's pop, it's hard to spot something deeper and more diverse when it comes cloaked ...

GLASGOW'S BLUE NILE did rather well with their debut album, A Walk Across The Rooftops. Following almost universal critical acclaim it sold a respectable 80,000 ...

Five years after their highly acclaimed debut LP A Walk Across The Rooftops, THE BLUE NILE are back, to the sound of much rejoicing and ...

"THE WHOLE Scottish scene is getting a little out of hand", admits Ronnie Gurr, an affable, affluent-looking Scotsman who, in his capacity as a roving ...

WHAT A romantic tale is The Blue Nile’s. I mean, you’re probably sick to the privy parts of hearing how they made an LP for ...

Peace with Honour: The Blue Nile

WHEN PAUL Buchanan opens the new Blue Nile album with the question "Now that I’ve found peace at last/Tell me, Jesus, will it last?", his ...

Above It All: The Blue Nile

When life dishes it out, Paul Buchanan and his group The Blue Nile pack a bag, settle somewhere new and, every half-decade or so, make ...

AS PROLIFIC AS the Easter Island statue makers and with almost as underworked a PR, The Blue Nile will feature heavily when Arthur C. Clarke's ...

THE NEAREST thing music has to Venice is the embodiment of melancholy in this aptly baroque setting. The melancholy, in all its lush romantic self-indulgence, ...

ANYONE WHO loves the Blue Nile as much as I do will know there is something profoundly holy about their music. Twenty years after the ...

HIGH IS THE BLUE NILE'S fourth album in twenty one years. It is – and shame on you if you doubted – worth the wait. ...

SOME TWENTY YEARS AGO Scottish electronics and hi-fi specialists Linn commissioned a local folk band to record a song for them, in order to demonstrate ...

Profile and Interview by Graeme Thomson, The Herald, 2006

THE FEW THINGS you may conceivably already know about Paul Buchanan are by far the least interesting: that he had a two-year relationship with the ...

The Blue Nile: A Walk Across the Rooftops (Collector's Edition)

1984'S A WALK Across the Rooftops remains unique in its fusion of chilly technology and a pitch of confessional, romantic soul that "alternative" types would ...