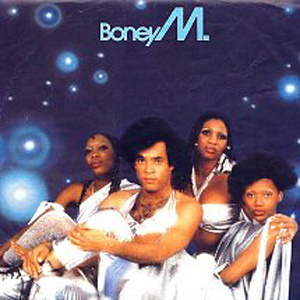 ATLANTIC OBVIOUSLY felt that they should hop onto the German disco camel before the hump drains, and they've done it in a fairly competent way. ...

That risque sleeve: "I hadn't even thought of it that way," says Boney M's Marcia! ...

Boney M: By The Rivers (well…sands, beaches, coves, quays and bays) Of Babbacombe

TORBAY OR NOT Torbay – that is the question! I am standing at the barrier of Platform 2, Paddington, one chilly Saturday morning expressing Brandoesque ...

IN THE words of the legend inscribed on t-shirts won by WEA pinheads at the time of the Hansaettes' second album, Love For Sale – ...

Seems life isn't so sunny after all for a brown girl in the ring, Liz Mitchell explains to Tim Lott. ...

WHAT MIXTURE of whimsy and misanthropy persuaded Arista Records to release a "Boney M megamix"? It appears to be part of a bizarre masterplan to ...

Boney M get back in the ring

Can a musical based on the group's cheesy '70s pop really attract new fans? Robert Sandall meets the men who believe it can. ...