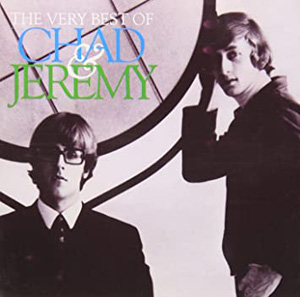 Chad & Jeremy: They lapped up our accents in America!

BECAUSE THE recording duo of Chad & Jeremy are currently performing separate functions, many unfounded rumors have been traveling the record circuit. ...

Chad, as you all must know, is one half of the singing duo, Chad & Jeremy. Although he presently lives in Los Angeles, he's done ...

Here we are back with that famous pioneer, Chad Stuart, on a coast-to-coast telephone conversation. If you want to make Chad happy (and Jeremy too), ...

The Chad and Jeremy Story

WHEN CHAD AND JEREMY were first invited to re-group, back in 1986 for the following year's British Invasion II tour, their first response was, "Hmmm, ...