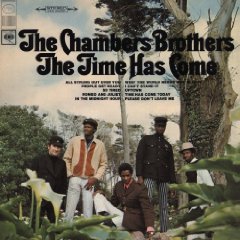 Albums from the Who, Otis Redding and the Chambers Brothers

THE DOORS' concert at the Hollywood Bowl Friday night should have been an exciting event, the high point of the career of a local rock ...

For Chambers Bros., Time Has Come in a Big Way

Profile and Interview by Mike Gormley, The Ottawa Journal, 1 November 1968

ENGLAND, NEEDLESS to say, has given us some incredible rock groups: The Beatles and Stones, The Who and The Kinks and The Yardbirds, Cream, Traffic, ...

THE CHAMBERS BROTHERS have enjoyed a good deal of popularity and commercial success during the past couple of years, but to be quite honest, the ...

THE CHAMBERS BROS. may well have taken over Blue Cheer's title of the world's loudest group. ...

The Chambers Brothers: 'They Put Us Up for Sale; People Bought'

THE CHAMBERS Brothers, who are Willie, George, Joe and Lester Chambers plus Brian Keenan, were dressed in the usual cool clothes they've been noted for ...

AT THE OUTSET, the Chambers Brothers were a warmly exciting gospel act (catalogued on a series of fine albums released by Vault), but they apparently ...

IT'S ALL in the moves. Willie, Joe and Pops of the Chambers Brothers are grouped around a microphone in the duskily-lit interior of Venture Sound, ...

AFTER A fairly lengthy absence from the charts – although they've by no means been absent from the music scene in general – The Chambers ...

Time for The Chambers Brothers!

IN THE STANDARD ANNALS OF "black rock", the acknowledged progenitors tend to be the usual suspects – Hendrix, Sly, Love. But there was another act ...