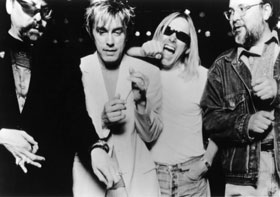 THE TRICK experience, but hardly cheap at £8.50 a shot. Even so, it's worth it, as is evidenced by the fact that Flyover in Hammersmith ...

Cheap Trick's Rick Nielsen and Robin Zander, playing San Francisco for the first time, talk about their whacky image and stage personas, being well supported by record company Epic, and how they should be written about in the Gay press!

WHEN A group has a guitarist with Donald Sutherland's face and Huntz Hall's wardrobe, a drummer named Bun E. Carlos who looks like Rod Steiger ...

It all started innocently enough. There I was, sitting in the office of an ordinarily credible marketing honcho at Epic Records discussing Marc Bolan and ...

WASN'T IT W.C .Fields who had on his tombstone — "Things could be worse. I could be in Philadelphia." ...

ANYTHING BUT a cheap trick, in fact. You may wonder why you keep seeing this bunch mentioned in esoteric magazines like Who Put The Bomp ...

AMERICA'S A FUNNY place for rock music. Just when you assume that the well of talent that unleashed classic outfits like the Velvet Underground, Doors ...

ON SUNDAY night at the Roundhouse, Cheap Trick showed how it should be done. ...

FOR ANYONE COUNTING, this is the third Trick LP to be released in a smidge under fourteen months. In that time, the band has played ...

DANIEL AND GLORIA met at a rock flea market when their hands reached for the one over-priced copy of Hackamore Brick's One Kiss ...

Without a doubt, Cheap Trick has definite shortcomings as a band. They're certainly not perfect. However, they've now got three albums in their catalogue and ...

Cheap Trick, Fundamental Ache And The Concept Of Divine Effort

SINCE THE onset of 'serious' rock criticism in the late Sixties there seems, for the most part, to have been a parting of the ways ...

An Afternoon Of Reality Therapy With Rick Nielsen & Cheap Trick

IT'S NO mere coincidence that Dave Edmunds openly admires Rick Nielsen, has dinner with him and appears onstage alongside Cheap Trick at the drop of ...

Cheap Trick: Wake Up, Rick – You're The First Superstar of the '80s

LET'S NOT mince words. The basic premise here is the why, wherefores and whatevers backing up the simple contention that within the next 12 months ...

IT'S IRONIC that Cheap Trick, having recorded a song called 'ELO Kiddies' on their debut album almost three years ago, should now be setting themselves ...

BRIEFLY, THIS is the fifth time in four years that Cheap Trick have vented their prodigious energies. Dream Police was made before Live At The Budokan made Cheap Trick ...

IN THE BEGINNING, Cheap Trick was lovable because they tried to pull off the toughest trick in the book: making rock that was both bonehead-hard ...

Rockford, Illinois (population 140,000) has made two notable contributions to the entertainment world: John Anderson and Cheap Trick. While there is little similarity between the ...

Wherein two highly anticipated albums refuse to be what was expected of them, proving neither fans nor skeptics correct in their assumptions. ...

AT A TIME WHEN AMERICAN ROCK'N'ROLL was sinking under the commercial weight of glitter-ball beats, arena bombast and California no-cal, Cheap Trick blew out of ...

Cheap Trick: Light of the Trick

The return of the pioneering power-pop band. ...