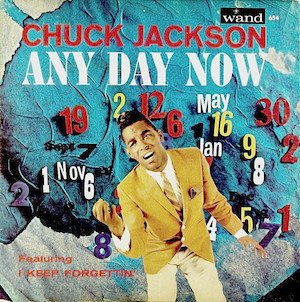 In A Mellotone: The Apollo

Chuck Jackson: "White Artistes Don't Have The Soul For Blues"

WATCHING CHUCK Jackson record is a gas! He's so creative and professional that he can listen once or twice to the band track and then ...

Chuck Jackson: Chuck's Foot Is Back On The Throttle

CHUCK JACKSON, one of the major R&B artists of the '60s, had 23 pop chart entries during his spell with Scepter/Wand Records. He then switched ...

Chuck Jackson: The need to succeed

ONE OF the major disappointments in what has otherwise been a very good year for our music was the cancellation of the proposed All Platinum ...

AN OFT-REPEATED myth about American popular music is that the early 1960s were a fallow period, dominated by greasy teen idols named Bobby. Supposedly, domestic ...