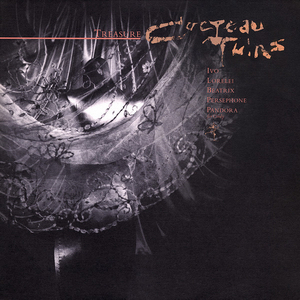 Review and Interview by Barney Hoskyns, MOJO, May 1996

AN UNFORGIVABLE THING happened in 1994. The Cocteau Twins released arguably their finest album to date, Four Calendar Cafe, only to have it roundly ignored ...

Ms. Fraser on singing and singers; on being a Cocteau Twin; on her relationship with Robin Guthrie; on friends and co-conspirators like Peter Gabriel, Damon Albarn and sometime beau Jeff Buckley.

Helen Fitzgerald gets intoxicated by the exotic mixture of the Cocteau Twins. ...

WHEN THE Cocteau Twins narrowed down to a two-piece (Robin and Elizabeth) in June of this year, they settled down for some rethinking and some ...

The Cocteau Twins: Twindrops Keep Falling On My Head

Robin and Elizabeth are the Cocteau Twins. They live together in London's Muswell Hill and have created an enormously successful musical partnership. PAUL MORLEY attempts ...

THE COCTEAU TWINS are innocents aboard the jolly roger of "positive-punk" specimens, blushing songbirds amidst the mascara'd goth macaws of Gene Loves Jezebel and Xmal ...

A new year and a new starter for THE COCTEAU TWINS who team up with CHRIS ROBERTS for talk, turkey and all the trimmings. ...

A PRE-RAPHAELITE beauty sweeps through trailing fronds and hothouse blooms... ...

Cocteau Twins: "None Of This Should Have Happened"

Unlistenable early tapes. Refusals to appear on Top Of The Pops. Information-free record sleeves. A mistrust of people "who can play all the strings on ...

The COCTEAU TWINS are back with a new album, a new baby and the same old "cathedral of sound". But as JOHN ROBB discovers, it's ...

"THIS WARM BATH of a record is a sensual invitation to wallow in an opiate haze of drifting melody" – Q's review of The Cocteau ...

ROBIN IS NOT HERE today. He is housebound with chicken pox, "covered in spots from head to foot, it's fucking terrible. I got it from ...

Three years after their split from spiritual home 4AD Records, the Cocteau Twins return with a new album, Four Calendar Cafe, looking to eclipse the ...

THE CORE TRIO, more triplets than twins, have become weary of the media tag locating them as other-worldly beings, cult objects disconnected from the realities ...

Profile and Interview by David Toop, The Wire, June 1994

"Some people know why they make music, I suppose. But we never talk about what we're doing. Ever" – Simon Raymonde, 1990 ...

The Cocteau Twins: We Are Not Amused

"FUCKING HELL," says the tiny, tortured woman as she shakes her birdlike head. "I just wish I knew what the fucking hell happened. ’Cause everyone’s ...

AFTER THE singles box set, a single-CD retrospective from the unique trio. ...

Retrospective and Interview by Barney Hoskyns, Dig, The (Japan), Fall 2000

ONE OF the hardest jobs I’ve ever had as a music writer – as a music fan – is defending the Cocteau Twins against people ...

Retrospective and Interview by Jim Irvin, The Word, April 2006

IN THE SUMMER of 1981, a member of staff at the Earl's Court branch of Beggars Banquet Records noticed an odd-looking couple loitering outside the ...

Review by David Quantick, The Word, May 2006

THE COCTEAU TWINS, in their 15-year career, were extremely fond of the EP format, so it makes sense for 4AD to bring all these together ...

It began with naivety and unbelievable luck, and ended with control freakery and cabin fever. ...

One half of indie's most ethereal duo on the eternal quest for "musical finesse and beauty" ...