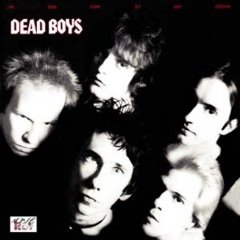 The Damned: The Fantastic Four versus the Big Apple

THE DEAD BOYS are part of anew generation at CBGB's, a generation that has finally succeeded in erasing that fine line that divides the cool ...

Dead Boys Tell No Tales (Under An Hour, That Is)

FIVE MINUTES into my first-ever meeting with the Dead Boys, and already I have an angle, a metaphorical hook for my story on the band: ...

The Resurrection of Stiv Bators

STIV BATORS is just about the easiest interviewee I've ever met. Just push "Record" and he'll talk for hours about anything that might make good ...

Old Dead Boys Never Die, They Just Get Spayed Away

The Germs: Germicide/The Dead Boys: All This And More/Various: What? Stuff (Bomp! Records)

see also Lords of the New Church, The