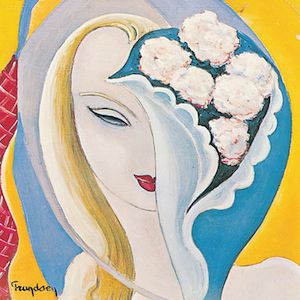 Clapton leads — and sings his heart out ...

DEREK AND the Dominos is Eric Clapton's new rock group, and the people in the audience who were chanting "Clapton" before the group came onstage ...

Derek and Dominos in Two Concerts ...

Derek & The Dominos: Layla and Other Assorted Love Songs (Polydor)

Beauty and boredom from Eric ...

QUESTION NUMBER One: how do you follow up a masterpiece? ...

Derek and the Dominos: In Concert

The Prince Of Love… Or How The Recording Of 'Layla', Clapton's Ode To Forbidden Love, Made Victims Of Derek And The Dominos

IMAGINE THIS story: a world-famous guitarist decides to form a band where nobody is supposed to know it's him. While it's coming together, he falls ...

Derek and the Dominos: 'Layla'

Derek and the Dominos: The Story of Layla

Retrospective and Interview by Phil Sutcliffe, MOJO, May 2011

NOTE: This is a slightly modified version of the original MOJO piece. ...

IT'S BEEN AN active, and retroactive, time for singer-songwriter/keyboardist Bobby Whitlock, best known as one of the playing pieces in the Eric Clapton-led group Derek ...

The strange tale of Derek, Gordon, George …and Bobby Whitlock

AUGUST 14. Summer of 1969. Oakland Coliseum. Eric Clapton, Rick Grech, Ginger Baker and Steve Winwood are on stage during the US tour to promote ...