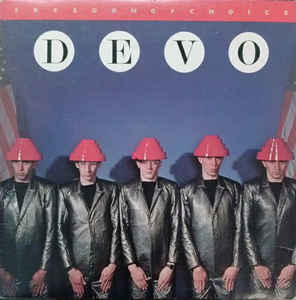 Mark Mothersbaugh on de-evolution, DNA, and the new dystopia, plus retirement and reformation, and the desert that is Los Angeles

Devo Look Into The Future!

DEVO/DEVOID/VOID/DEVOTED/DEVOLUTION: Savage attempts a discrete distillation. Devout. Things are not as they seem, nor as they have been reported.... 'The cities are our major source ...

We Are Devo. We Are The Next Thing

Ian Birch talks to an American band with heavy friends – like Eno and David Bowie ...

Devo: Are We Not Ready?

THE FIRST THING you notice on arrival at Koln airport is the modernity and organization. No baggage queues. No pre-fab ramshackle buildings. ...

THE TRUTH ABOUT DE-EVOLUTION AND OTHER PLANETARY MODES. ...

The American Midwest: Akron and Cleveland

Exploring alternative hives of industry in Akron, City of Rubber, and Cleveland, City of Steel. ...

AS BILLY MARTIN once put it, "I feel very strongly both ways." Although Devo's cosmic significance may truly compare with that of yesterday's toast, they ...

Devo: Where the Rubber met the Road

Devo: In the Terminal Zone

IT'S OUT of the blue and into the black. A place is left somewhere behind where the front pages of the daily newspapers comment hysterically ...

BACK IN the heady days of late '78, when the UK was brimming over with Devo-tees, Gerald V Casale, lead Devo, suggested that certain elitist ...

Some of us out here are still Devo ...

I'M HERE to testify they've done it! Gone back, right along the de-evolutionary scale, down to the Bill and Ben stage. What an achievement! Five ...

AFTER THE SEMINAL mutant microcosm of the modern world they constructed on Q: Are We Not Men? A: We Are Devo., Devo have moved on ...

LOS ANGELES — "Someone wanted to know where your home is," the waitress said to Mark Mothersbaugh. "I don't have a home," Mothersbaugh replied softly, peering at ...

NOW THAT Jerry Casale has seen the Devo concept actually take root in the California psyche – now that his theory of America has been ...

The Soul You Save May Be Your Own: Devo's New Traditionalism In Action

"SHE HAS GOT the rap down right!" says Devo's Jerry Casale with a mixture of admiration and awe. The waitress in the Garden coffee shop ...

CONTRARY TO the prevailing opinion, when these five Akron androids pose the rhetorical question, "Are we not men?," they don't mean, "We are not men," ...

Devo: Where Are They Now?

HAILING – along with the rubber tyre and Rachel Sweet – from Akron, Ohio, Devo's prankful art-pop, deconstructivist theories and matching boilersuits made perfect-imperfect sense ...

DEVO'S FIRST single, 'Jock Homo', was released in 1977. An instant hit, it expounded the group's theory of de-evolution, that mankind is regressing, rather than ...

Jade Dellinger & David Giffels: Are We Not Men? We Are Devo!

DEPENDING ON which side of the critical fence you were standing at the time, '70s art rock group Devo from Akron, Ohio were either "the ...

We're The Pits, or Punk Comes to LA

THREE YEARS AFTER my group Christopher Milk -- signed to Warner Bros. and produced, rather poorly, by a famous English producer -- agreed that we'd ...

The Return of Devo

Report and Interview by Stephen Dalton, Times, The, June 2010

FOUR DECADES SINCE Devo first donned their matching overalls and began their assault on the pop mainstream, America's original disco-rock Dadaists are back. ...