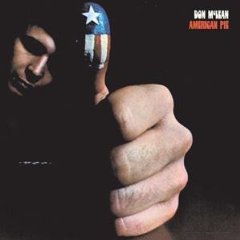 The singer/songwriter talks of his environmental concerns; being too commercial for the folk world; working in Nashville; choosing the musician's life; his association with the Weavers' Lee Hayes; his early albums including American Pie; playing with the Persuasions and Jordanaires; keeping his copyrights, and the importance of ideas.

DON WALKS INTO MY cluttered house, up four flights and to the left, arriving in a confusion of papers, cats, ashtrays. ...

THERE ARE TIMES when rock music seems about as relevant as O-level Geography, and listening to Don McLean's new album is one of them. ...

Eye On The Future, Ear In The Past: Don McLean

DON McLEAN took a deep breath and launched into a long qualification of his next album — how one cycle was complete and how his ...

AFTER RECEIVING one of the warmest receptions that it's possible for a sepulchral Albert Hall audience to give there can be no doubt about either ...

AN ALBUM of other people's songs from someone who's written a few celebrated ones of his own? Yes, this is Don McLean laying bare his ...

Don McLean: One Of Mammy's Boys

DON McLEAN on the traumas of 'instant' success and the virtues of Al Jolson's act...not to mention, of course the incredible Perry Como and Bing ...

DON McLEAN could well be the pop Orson Welles of the Seventies, a talented man who happened to make his initial impact with one of ...

UNEASY PREAMBLE: I don't really know what to make of this album. Bits of it seem to me very good, other bits leave me unconvinced, ...

Don McLean: How A Hobo Could Save McLean From Endless Pie

THE BIZARRE tale of a black hobo with one leg who fell from a Dallas bound train in the early part of this century and ...

Don McLean at The Albert Hall

WHY SHOULD DON McLean have chosen to open his Albert Hall-concert – and with it his first British tour for eighteen months – with his ...

COULD IT be that protest singers are about to make a comeback? It makes sense – after the glitter and the head-banging punk came out ...

ALTHOUGH HE has become generally underrated because 'American Pie' and 'Vincent' in their different ways were songs impossible to top, to me Don McLean has ...