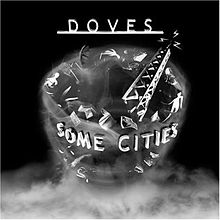 THINGS FINALLY fall apart for Doves about a year ago. They've spent five years writing and recording, but very little material has been released. Their ...

EVER SINCE not winning the Mercury Music lash-up thingy, Doves have clearly decided to obliterate their disappointment amid a flurry of activity. So it is ...

TONIGHT, IT'S obvious that Doves don't yet think of themselves as proper English rock stars. ...

RBP: I was interested to read that you holed up in various remote parts of Britain for Some Cities. I seem to recall Elbow did ...

Report and Interview by Dave Simpson, The Guardian, 25 February 2005

The Manchester that Doves grew up in has disappeared. They take Dave Simpson on a guided tour of the city — and show him the ...

Wings of desire: Deeper excursions into melancholy from Manchester's most adventurous ...

JIMI GOODWIN, the affable and bearded bassist-singer with Mancunian trio Doves, leans forward in his seat for an endearing moment of honesty. ...

DOVES ARE THE great survivors of Manchester Rock. Jimi Goodwin and brothers Jez and Andy Williams were schoolpals in Wilmslow and, since joining together as ...