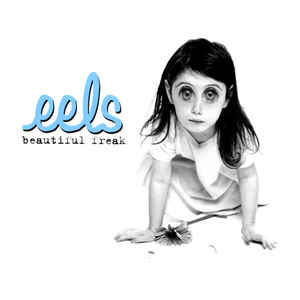 Eels: The Freak Shall Inherit The Earth

The EELS are the band currently treating Britain to the joys of geek power with their hit single, 'Novocaine For The Soul'. And leading their ...

THE SOUND IS delicate and strange: the same weirdo innocence as the saucer-eyed little girl on the sleeve — and the melodies mostly downbeat. But ...

HAPPY! SAD. H-h-h-happy! Sad. You know those theatrical mask things, one with a smile big enough to house a Manic's packed lunch, the other with ...

EELS MAINSTAY E is a misunderstood man. Even his name is misunderstood – E apparently being Mark Oliver Everett's childhood nickname (all his friends were ...

Eels frontman Mark "E" Everett discovered his father's dead body, watched his mother die of cancer and failed to save his sister from suicide. "You've ...

E's are good: revisiting a brilliant back catalogue ...

E is for Eels

EELS' MARK EVERETT, usually known as E, has not deployed an unconsidered word in seven previous albums, but the title of his eighth is exquisite ...

THE TENTH ALBUM from Eels shows that, while they may have fallen out of the limelight, their music is as sharp as ever. ...

THE SECOND EELS album, Electro-Shock Blues, defined Mark Everett's mode of beautiful, redemptive reactions to a growing list of personal tragedies, spinning him off the ...