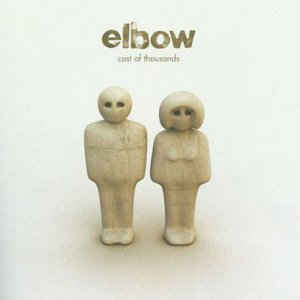 A somewhat wind-blown Guy Garvey and pals on the making of Cast of Thousands, prog rock, Manchester, religion and being stalked by Cameron Diaz

Elbow: Asleep In The Back

HOORAY! MANCHESTER has delivered its first great album of the millennium. Others will doubtless follow, but few will conjure up magic as brooding as Elbow ...

Elbow: Asleep in the Back (V2)

WHAT'S IN a name? The Bury-based indie combo Elbow found out a year or two ago when, after Universal's swallowing of their label, Island, they ...

Laid-back troupe shoot from zero to Square One in just over a decade! More power to them, says Jim Irvin. ...

"TELL YOU WHAT we watched the other night," mumbles Guy Garvey into the mic, while tuning up onstage between two intensely moving songs. "The Last ...

AS YOU'LL KNOW by now, rock's favourite Oxonians have hauled their guitars out of the deep freeze and put the Warp(ed) electronica of Kid A ...

Given The Elbow: The Confessions Of Guy Garvey

Two years ago, Elbow released Asleep In The Back, an intense suite of prog-inflected songs that stands as one of the finest albums ever to ...

Angels of The North: Elbow

CAN THIS REALLY be Manchester? Two days have passed since thousands of Italian footie fans flooded the city for the Champs' League Final and the ...

THERE WAS an air of resignation when the fire alarm went off at the Queen Margaret Union in Glasgow on Thursday night and the splendidly ...

ELBOW HAVE BEEN brushed by fame almost accidentally; first, when their debut album, 2000's Asleep at the Back, was Mercury nominated, then when the singer, ...

WHAT A LONG, hard slog it has been for Elbow. Eighteen years in the pop trenches and still only on their fourth album. They have ...

THIS IS THE FOURTH album from the most recent winners of the U.K.'s prestigious Mercury Music Prize and, after three releases on V2, the first ...

TODAY IS lead singer Guy Garvey's birthday, and he's in a gaming mood. "How old do you think I am?" he asks the crowd, early ...

U2 Live Under A Slate Grey Claw. Chris Roberts reports from Wembley ...

IT'S THREE AND A HALF MINUTES into Build A Rocket Boys, and Elbow are sounding like a band. And that band is Genesis, circa 1973, ...

IN THE THREE years since The Seldom Seen Kid hoisted the band into the first rank of arena-rock dependables, Elbow have had plenty of time ...

TONIGHT, CARDIFF'S premier gig-shed has turned into a family parlour. Five picture frames hang from the stage, gold and old-fashioned, each of them holding a ...

ANY WOMAN interviewing guy GARVEY will inevitably drift to thoughts of what he would be like to live with. This is because every anecdote that ...

ELBOW HAVE BEEN describing this end-of-year arena tour as their "farewell party", and the reason for their sabbatical is a curious one. Frontman Guy Garvey ...

Profile and Interview by Andy Gill, The Independent, 26 February 2014

WHEN GUY GARVEY split from his long-time partner Emma Unsworth, he had to get away. Far away. The genial, bear-like singer knew he needed a ...

Elbow: The Take Off and Landing of Everything

THREE YEARS BEYOND the nostalgic somnolence of Build A Rocket Boys and things have changed. Guy Garvey is now beyond an amicable split from his partner of ...

Profile and Interview by Geoffrey Himes, The Washington Post, 8 May 2014

BIG HANDS, a pub in Manchester, England, that takes its name from a Violent Femmes song, has long been a watering hole for local bands. ...

Long stretches strained for effect, but at their best Guy Garvey's band make the creation of beauty appear effortless. ...

Elbow: Giants of All Sizes