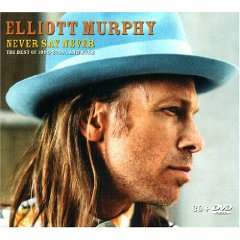 GREAT WHITE ROCK has not often come from New York City and its surrounding boroughs, even though – or perhaps because the American music business ...

Profile and Interview by John Swenson, The Village Voice, 29 November 1973

I DOUBT IF anyone has ever taken a poll, but Blonde on Blonde seems to be recognized in a lot of circles as Dylan's "best" ...

UNLIKE THE everyday American pop star, Elliott Murphy doesn't need to demand attention when he enters a room; he just walks in, and he's got ...

NEW YORK: A noticeable aspect of the current rock scene here is the number of artists who are very directly influenced by musicians of the ...

Is it time to shut the closet door? OUR HERO SEES THROUGH THE SEE-THROUGHS AND COMES TO THE CONCLUSION THAT ELEGANCE IS MORE THAN A LIMP ...

Lost Generation, the second album by this hero-obsessed New Yorker, made it clear that Murphy’s haughty, proper-noun-laden style could be undercut by unsympathetic or insensitive ...

A FEW years ago, Rolling Stone printed a sizeable review of the first albums by Elliott Murphy and Bruce Springsteen, assessing them as contenders for ...

WHEN I FIRST put this record on the turntable, it spun and revolved just like any other vinyl tostada. The needle, just like always, ate ...

I WAS HALFWAY through my cheeseburger when Elliott Murphy hit stage. He was greeted by the kind of applause that is reserved for unknowns who ...

BACK IN 1973, this celebrated Long Island singer/songwriter and the New York Dolls were the twin toasts of the town's still-nascent rock-crit community. ...