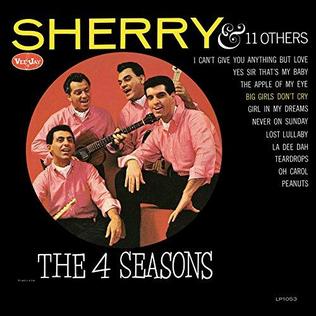 First we hear from Frankie Valli: the process of his leaving the Seasons; his solo career and his chronic ear problem; the anonymity of the other members and Frankie's plans for post-Seasons life. Then we hear from Gerry Polci: being recruited into the band; singing lead on 'December '63 (Oh What A Night)'; making the Helicon album... and Bob Gaudio's role as writer and producer.

Frankie Valli and Bob Gaudio chat about the Jersey Boys musical, about Bob Crewe, the Disco years and the lost Seasons/Beach Boys album.

You'll be Hearing a Lot More of the 4 Seasons

The Four Seasons, as they dash into Britain, tell Disc We're Getting Used to Tearing Around

"SURPRISED ABOUT our last-minute British trip? No, I guess not," said Tommy de Vito of The Four Seasons over fried eggs and sausages at London's ...

Taping A TV Show With The Four Seasons

THE STAGE was cold and there were very few people around. This wasn't the usual chaotic taping session, for although they were in America, what ...

Celebrities In Detroit: The Four Seasons

LOS ANGELES – The Four Seasons came to the West Coast to perform in the area for the first time and completely conquered all who ...

LONGEVITY IN the entertainment world is a fleeting dream for most performers. A handful out of all the acts brought forth are able to sustain ...

The Four Seasons: Ten Years And Still Hanging On

IN AUGUST LAST YEAR Frankie Valli and the Four Seasons celebrated ten years as one of the most successful recording groups America has ever produced. ...

Retrospective by Bob Fisher, The History of Rock, 1982

Why the Four Seasons were perennial chart-toppers ...

"... He turned on his record player, dressed up in his sharpest clothes, and practiced dancing as if as long as Kookie Byrnes or Cousin ...

Frankie Valli and the Four Lovers

IF ‘CHICAGO AIN'T Nothin' But A Blues Band’, then Newark ain't nothin' but an Italian quartet. It's a safe bet that the northern New Jersey ...

A FAILED AUDITION for a gig as a lounge singer at a low-rent bowling alley in Union, New Jersey, might be the sort of experience ...

Frankie Valli: Looking Back at 50 Years of the Four Seasons

THERE IS A SCENE in the hit Broadway musical Jersey Boys that represents the sustained success of Frankie Valli, Bob Gaudio and their group, the ...