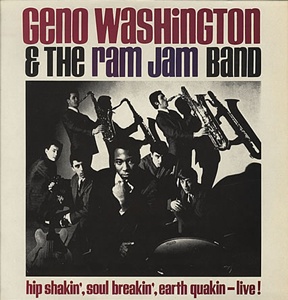 Rik Gunnell: The Man Behind Fame and Farlowe

AND IN THE beginning there was Georgie Fame. At least, that more or less how it was for Rik Gunnell. Disregarding the seventh day of ...

THE COUNTRY is due for one of the most powerful package shows ever staged this Autumn, judging by the "pilot run" of the Fame-Farlowe concert ...

A GREAT SHOW and a puzzling audience reaction. That was the net result of the first night of the Georgie Fame package tour at Finsbury ...

GENO WASHINGTON'S triumph is not so much a musical one, as a victory over the minds of elderly mods, who have seized upon the Ram ...

GENO WASHINGTON bounced in for a chat with all the energy of a peak-conditioned gymnast. Which isn't surprising as he WAS a gymnastic instructor in ...

WHEN VINEGAR JOE are on stage Pete Gage is probably the last person you notice. He stands towards the back, almost out of sight, adding ...

In other words GENO WASHINGTON is back. And proud. And Bald. ROGER ST. PIERRE talks to the veteran soulster on his return from the Amazon ...

BY THE TIME I'd reached the counter, I'd forgotten it. "What was it again?" I called over to the Dexy's tables. They said "Five teas ...

Various Artists: Buttercups and Rainbows – The Songs of Macaulay and Macleod

TONY MACAULAY and John Macleod had the Midas touch. When their 'Baby Now That I've Found You' hit number in November 1967 it was replaced ...