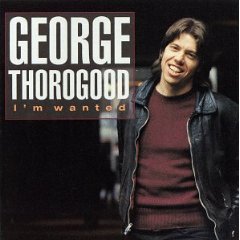 WHEN I FIRST heard this record some months ago, I was appalled. "One bourbon, one Scotch and one beee-ah," George Thorogoood was mush-mouthing over the ...

George Thorogood & The Destroyers: Ain't Nuthin' But The Blues Band

LOOKED AT MY watch and it was almost one, and George Thorogood And The Destroyers are just sloping on stage for their third set of ...

AS THE FRIDAY nite police cars go drooling thru the streets the air inside Keystone, Berkeley is thick enough to cut with a chain-saw. The ...

George Thorogood & The Destroyers: Move It On Over

THE BOTTLENECK that ate Delaware returns to your hearts and turntables: no steps forward, no steps back. Move it On Over is this or any ...

IF RECENT REPORTS are to be believed, Beserkley Records may be in some kind of difficulties, at least as far as their English office is ...

GEORGE THOROGOOD sits in a hotel room in western Massachusetts, watching television. It's a bitter cold November night; in a couple of hours he will ...

George Thorogood Cuts Through The USA

YOU COULD see it coming. About a hundred yards off, an old Checker Marathon cab was roaring along the asphalt, eating up the broken white ...

IF GEORGE Thorogood didn't exist, a true-blue rock & roll fan would be tempted to invent him. The guy obviously believes Chuck Berry created the ...

Thorogood's Blues-Rock Has Made Big Leagues

IN 1980, GEORGE Thorogood and the Delaware Destroyers, were really gathering momentum with their traditional brand of blues-based rock. Their second album, Move It On ...

GEORGE THOROGOOD & the Destroyers have added a few wrinkles, but the quartet hasn't changed much since Thorogood first danced on local tabletops seven years ...

George Thorogood & the Destroyers: Raiders of the Lost Axe

Bluesman George Thorogood is celebrating 30 years of 12-bar brilliance with a new Best Of… and a global tour. He talks to Terry Staunton. ...