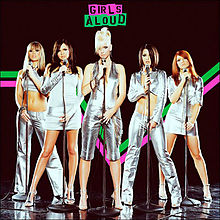 Despite the hype, could reality TV's Girls Aloud be the first girl band to matter since the Spice Girls? ...

Xenomania: Heart Of The Country, Home Of The Hits

Profile and Interview by Ben Thompson, The Observer, 18 July 2004

In rural Kent, the future of British pop is being shaped by Brian Higgins – a Phil Spector for the 21st century. Ben Thompson meets ...

How I Became a Girl Aloud

Caroline Sullivan spends a week in the shoes — the very painful shoes — of the UK's number one girl band ...

Girls Aloud: What Will the Neighbours Say?

THE 'LOUD'S FABULOUS run of hits to date is as close to a 21st Century Blondie as we're likely to come: two of them — ...

"I JUST CAN'T BELIEVE THAT, four years on, we're doing an arena tour!" announces Nadine Coyle with genuine astonishment. She's not the only one. While ...

Girls Aloud can't write songs. So what? They turned pop on its head ...

Live Review by Caroline Sullivan, The Guardian, 15 May 2008

GIRLS ALOUD long ago ceased to be a guilty pleasure, and are now just a pleasure. It defies the laws of reality TV that they're ...

SOULLESS THEY may be, but modern leisure hangars are efficient places when it comes to meeting the needs of those who come to see their ...

THE RECESSION does not appear to be affecting Girls Aloud, whose entrance involves pyrotechnics, hydraulic platforms and the whipping-off of glittering white ballgowns to reveal ...

Often hailed as the best singer in Girls Aloud, now Nadine Coyle is going solo — with a little help from Tesco's. So is this ...

A DECADE AGO, when reality TV show Popstars: The Rivals pitted Girls Aloud against favourites One True Voice, you wouldn't have put money on the ...