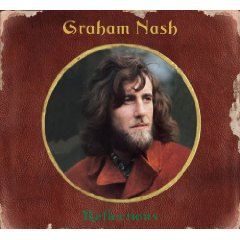 The ex-Hollie and CSN(Y) associate talks about his new album This Path Tonight; about seeing the Everlys in Manchester as a youth, harmony singing, the recent changes in his life; about Trump, religion and the state of the world, and his continuing love of photography; and about the tribulations of David Crosby and the health of old flame Joni Mitchell.

THE HOLLY WHO has found his face is Graham Nash. For too long the Hollies have been written about as "the faceless wonders of pop" ...

Update, 2020. I paid no attention to Graham Nash or to his band the Hollies, the close-harmony Manchester band formed in 1962 inspired by the ...

JONI MITCHELL'S new album, Blue, is about to be released here by Warner Brothers (K 44128). A large proportion of Joni's most notable songs, to date, ...

IF YOU ACCEPT Graham Nash on his own terms, which is simply as a nice guy who somehow wound up a musician, then you probably ...

NEW YORK – In the living room of a moss-green suite at the Plaza Hotel, Graham Nash sits at the piano with an harmonica braced ...

CONSIDERING the wastage rate in the higher echelons of rock 'n' roll, it's not difficult to accept as the norm a situation in which an ...

Graham Nash: The Winds Of Change

INTEGRITY, MORE than any other word seems to define what Graham Nash is all about. ...

Graham Nash: A Technology to Teach the Children Well

IN THE INFORMATION age, powerful technology without compelling content is an empty experience indeed. This realization by the singer Graham Nash led to his partnership ...

"I TEND TO GET carried away with technology," admits Graham Nash, one-third of the sweet harmonic equation that comprises the signature sound of Crosby, Stills ...

THERE ISN'T MUCH mystery to Graham Nash. Not that that's a bad thing at all. In fact, if you want to know how the British ...

"I knew that I would have to spend years with these guys" – Graham Nash  ...

The nice guy with the soaring voice finally gets his due. ...

IT HAS NEVER occurred to me before Graham Nash points it out, but 'Marrakesh Express' isn't just a breezily literal account of the illicit delights ...

Henry Diltz: Caught in the Canyon

Retrospective and Interview by Sean O'Hagan, Observer, The, 26 May 2013

He photographed the most enduring images of the '60s folk-rock stars who lived in L.A.'s Laurel Canyon. Now Henry Diltz stars in a documentary about ...

CSNY 1974: An Interview with Graham Nash