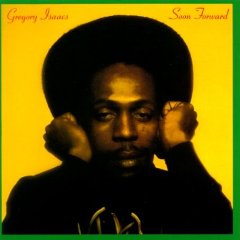 The elusive Mr Isaacs tracked down by Jack Barron ...

FOLLOWING A brief sojourn on Pre, the 'Cool Ruler' now elects Island to release the latest fruits of his labours. A change of label does ...

SUCH IS the flexibility of Gregory Isaacs's vocal prowess that he does not deserve to be typecast to a particular style. Isaacs is first and ...

SEEMS LIKE EVERY TIME you turn around, as Bob Dylan so succinctly put it, there's another hard-luck story you're gonna hear. Most would appear to ...

IT'S SINGULAR how Gregory Isaac releases a better number of tunes as good as 'Night Nurse' over the past decade and longer, and as good ...

TAKE ANY moderate gathering of citizens intent on peaceable pursuit and out comes the Babylon in force. I am growing altogether more and more disgruntled ...

PRIOR TO the glorious advent of soulful lover Pat Kelly in more recent weeks, lean, laconic crooner Gregory Isaacs was recognised as possibly the most ...

SMOOTH IS the word for Gregory Isaacs. So smooth, and so suave. The cool king of that gentle, romantic Jamaican reggae called lover's rock. ...