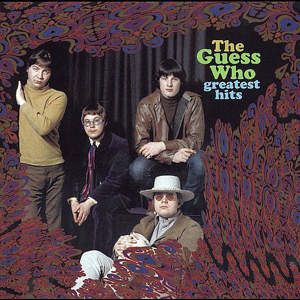 CANADA'S POP music industry is still in the planning stages, in comparison with the U.S. recording market. It is small and disorganized. When 'Shakin' All ...

The Animals, Canned Heat and Guess Who albums

The Animals With Eric Burdon: In The Beginning (Wand) Canned Heat: Live At Topanga Corral (Wand) Guess Who: Shakin' All Over (Scepter) ...

The Moody Blues: In The Beginning/The Guess Who: Sown and Grown in Canada

THESE TWO ALBUMS have quite a bit in common; both consist of early material released now to cash in on the popularity of the groups ...

Guess Who: They Don't Know What We Look Like

"Rolling Stone is a biased paper.""They're full of shit.""Erroneous information." ...

THE GUESS WHO, despite their good intentions, have never seemed like natural candidates for superstardom. With a collective personality that could be described as lumpy ...

Randy Bachman: Guess Who's Back Pages

HE PLAYS PIANO as well as Nicky Hopkins Jerry Lee, When he sang 'Running Bear' he sounded like a cross between the late great Jimboy ...

The Guess Who: Road Food

DISMISSED by snobbish critics as a clockwork singles machine, the Guess Who have continued selling albums and filling concert halls even after the hits stopped ...

Guess Who's a smash!

"I WANTED to buy some records, so I went collecting for UNICEF on Halloween and took the money," recalls the 26-year-old lead singer for the ...

"I'll kill your kid sister,I'll murder your dadI'll rip the lashes off your eyes,I'll slaughter all your cattle,And I'll burn your cropsIf you're dancin' with ...

The Guess Who Battle Obscurity With Flavours

They're probably Canada's most influential group aside from The Band. Now, after nearly a decade of hit-making, the Guess Who are fighting to prove their ...

The Guess Who: Power in the Music

RIGHT OFF THE BAT, the one thing you can say for Power in the Music is that it is everything last year's predecessor Flavours wasn't, ...

VANCOUVER – For perhaps the fifth time in 20 minutes, the phone in Burton Cummings' Vancouver hotel suite rings, cutting the artist off in mid-answer. ...

Retrospective and Interview by Nicholas Jennings, Maclean's, 29 May 2000

ON AN EARLY May afternoon, on the eastern outskirts of Winnipeg, a spring ritual is under way. Like bears emerging from hibernation, some grey-haired men ...

CULTURALLY, CANADA is without a doubt one of the most diverse nations on the planet, and with its record stores awash since the 1950's in ...

IN HIS CAREER as a co-vocalist/guitarist/songwriter for not one but two pretty successful classic-rock bands, the Guess Who and Bachman-Turner Overdrive, Randy Bachman has sold ...