Hank Ballard and the Midnighters 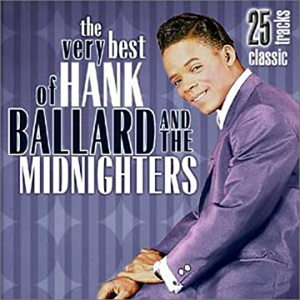 The chief Midnighter talks about his 'Twist' royalty legal entanglements, a loan from the notorious Morris Levy and his current musical activities.

From Alabama to Detroit, from The Royals to The Midnighters, the great Hank Ballard tells of Clyde McPhatter, Billy Ward, King Records and 'The Twist' and 'Work With Me Annie'

IN DAYTONA Beach it rains every afternoon for half an hour or so. When Hank Ballard arrived, it was raining. It's hard to make a ...

Hank Ballard: The Man Who Twisted Himself

COVER VERSIONS have long been the bane of the rhythm and blues field of music. During the 'Fifties, the major record companies kept their ears ...

The All Platinum Sound

THERE WAS THIS company in Philadelphia called Sherjam and in the winter of 1979-1980 and maybe the following year they put on a series of ...

Retrospective by Cliff White, The History of Rock, 1982

HANK BALLARD is most often remembered as the man who wrote ‘The Twist’ but lost out to Chubby Chucker as the populariser of the dance ...

Hank Ballard & The Midnighters: From The Sins Of Annie To The Twist

IT WAS TOWARDS the end of 1951 that Johnny Otis (born John Veliotes; he found it gainful to pass as black), the 30-year-old Savoy recording ...

Hank Ballard: The 'Twist' and Turns of a Rock Pioneer

HANK BALLARD wrote and recorded ‘The Twist’, but it was Chubby Checker who had the big hit record. With the early R&B group, the Royals, ...

B&S TALKS TO ONE OF THE TRUE UNSUNG HEROES ...

THE ROYALS HAD a brief but important part to play in the development of rock 'n' roll. They were door-openers much like the Chords and ...

If you not movin' your hips, it just ain't happenin'. – Hank Ballard on dancing ...

RHYTHM & BLUES singer Hank Ballard (76) died of throat cancer on March 2 at his home in Los Angeles. His chief claim to ...

Fifty years ago, a new dance craze swept the world and changed for ever the way people move. Richard Williams, up on his feet when it ...

Chubby Checker may have become synonymous with 'The Twist', but that didn't bother the song's composer. "It was a blessing for me," said Hank Ballard ...