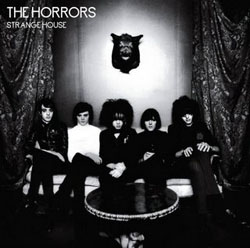 Back in Black: The Goth Revival

Report and Interview by Dave Simpson, The Guardian, 29 September 2006

THE FAVERSHAM, a pub close to Leeds University, is a brightly decorated bar, popular with lawyers and office workers. But a couple of decades ago ...

Profile and Interview by James Medd, Independent on Sunday, 18 February 2007

They came out of nowhere (well, Southend) and then suddenly they were everywhere. Now, with a full-length album to back up their formidable haircuts, James ...

Review by Dorian Lynskey, The Guardian, 1 May 2009

THEY LIVE! Left for dead after a hype overdose two years ago, Southend's ghost-train garage-rockers have risen again with a second album so daring and ...

The Horrors: How To Survive On The Outside

Author's note: This is the full, unedited version of the piece that appeared in The Independent ...

THE HORRORS are true pop chameleons. ...

THE HORRORS know all about deceptive appearances. Their mid-00s emergence saw the music press in a lather, hype peaking with inevitable derision creeping forth from ...

Three of the planet's most diffident, messy and murky indie bands throw open the doors and let the pop stream in. ...

The Horrors: The Roundhouse, London

ONLY THOSE WITH tin ears have been "surprised" by The Horrorssonic muscle. On account of their youth and subscription to textbook Goth aesthetics, they were ...