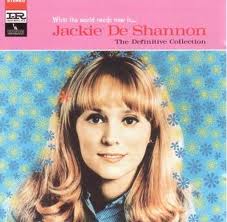 RIGHT NOW, let's stop messing around. Let's not keep the delectable Jackie de Shannon in suspense any longer... just one good heave-ho and her first-rate ...

Most Fantastic Show Ever! ...

Live Review by Philip Elwood, The San Francisco Examiner, 7 May 1971

ONE OF THE few white singers ever to get convincingly into soul-music and be accepted even by purist fans. ...

Jackie DeShannon: Your Baby Is A Lady (Atlantic SD 7303)

JACKIE DeSHANNON is one of the greats. Writing memorable hits for Brenda Lee and the Fleetwoods ('Dum Dum', 'Heart in Hand', 'The Great Impostor'), then ...

"IT SEEMS that I've always been ahead of my time — or 'about to happen' ever since I started in the early '60s," says Jackie ...

Jimmy Page Gives The Interview Of His Life

A Three-Part Series — Part One: Pre-Yardbirds ...

Interview by Jude Rogers, The Guardian, 1 May 2009

IT'S LUNCHTIME at Claridge's, and a glamorous blonde in sparkling stilettos shimmers out of the lift. No one bats an eyelid, but then she starts ...