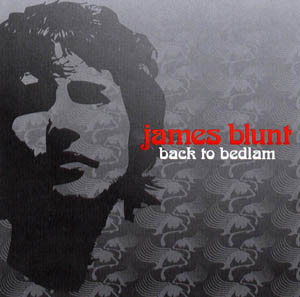 GENETICALLY, JAMES Blunt is much too posh to rock. Public school (Harrow), a top university (Bristol), Sandhurst and a commission in the Household Cavalry is ...

Live Review by Tim Cooper, The Independent, 5 May 2005

IN THE FRENZY to find a new Damien Rice or David Gray, it suddenly seems as if there's a sensitive singer-songwriter on every street corner. ...

James Blunt: Back from Bedlam

Profile and Interview by Tim Cooper, The Independent, 10 June 2005

How did ex-soldier James Blunt go from serving in Kosovo to playing gigs? Tim Cooper finds out. ...

James Blunt came to pop stardom the hard way, via Harrow, Sandhurst and the Household Cavalry. ...

I was Blunt’s instrument

"DOUBLE WHAMMY for Blunt," says a headline in this week's issue of trade magazine Music Week, acknowledging the fact that songwriter James Blunt is at ...

James Blunt: "'You're Beautiful' Got Me Laid"

The Americans think he's "Prince William with a guitar". There is one important difference. James Blunt knows 53 ways to kill a man. ...

James Blunt: How we made 'You're Beautiful'

'It's portrayed as a romantic song but it's actually a bit creepy. It's about a guy — me — stalking someone else's girlfriend while high' ...