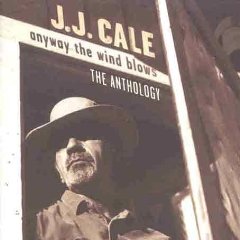 SOME ARTISTS set a style so distinctively their own they become immediately generic; as with The Ramones or Led Zeppelin, J.J. Cale's first album Naturally ...

The 'After Midnight' Man takes us back to Tulsa, and on to L.A.: how he's stayed a step outside the music business, how Clapton's 'After Midnight' cover saved his ass, and on the changes he's seen in his many years as a musician

J.J. CALE just loves to mumble. Like, if he were peeking over my shoulder right now, watching me write this, and I suddenly asked him ...

Just listen to the mystery man ...

Review by Charlie Gillett, Let It Rock, May 1973

If J.J. Cale were told to climb a mountain, he’d probably ask to be blindfolded and then start walking up backwards. He likes to make ...

YEAH, KING of the Laid-Back and all that bananas, but it goes a little deeper than that – cos, even though he probably spends more ...

The legendary apostle of laid-back rock, J.J. Cale, is coming to Britain for two London concerts next month and his new album and old material ...

Which means he doesn't talk much. But Ian Birch gives us the full low-down on the low-key Mr. Cale. ...

J.J. Cale: How He Gets His Unique Sound When Playing Live And Recording

SO FINALLY J. J. CALE MADE IT TO BRITAIN. The sleepy Okie singer, guitarist and master of the recording studio isn't particularly keen on talking ...

J.J. Cale: Endurance Of The Anti-Hero

J.J. Cale reckons he's pretty good at doing nothing. He sleeps as long as he can ...

THERE ARE only a few things you need to know about J.J. Cale. ...

J.J.CALE LEANS back from his lunch and reaches for the tab, waving aside the objections of his guests with unusual tenacity. "Might as well do ...

MENTION THE name of J.J. Cale to any blues/rock guitarist and you'll be greeted with a knowing grin and a nod of appreciation. Cale remains ...

"ALL MY records are kind of in a demo state," says the elusive J.J. Cale, typically self-effacing, in the L.A. office of BMG Records one ...

J.J. Cale: No Name, No Number, No Pack Drill

HE IS THE MOST unrecognizable man in pop music; success, it seems, comes to him only when he wants it. And a major part of ...

WHISPERING BOB Harris introduces him as "very simply a legend", this grizzled geezer who's spent the intermission on stage with his back to the audience ...

COINCIDENCE OR NOT, the phrase "laid back" crept into common use right around the time of J.J. Cale's first album. Nearly everyone but Cale missed ...

FIFTEEN MINUTES before J.J. Cale is due to take the famous stage of Manhattan’s Carnegie Hall, a wiry, hobo-ish figure can be seen wandering across ...

THERE'S SOMETHING IMMENSELY comforting about Cale's stubbly resistance to musical fashions, and that warmth spreads easily through this album, which has the same intimate feel, ...

MOJO: Does making albums get harder or easier with time? ...

J.J. Cale: To Tulsa And Back

After an eight-year wait, a new studio album from the musician Eric Clapton said he wouldn't mind being. ...

ESCONDIDO — J.J. Cale is enjoying his lunch in a corner booth at Olive Garden, cloaked in the anonymity he's taken pains to cultivate throughout ...

THE POPULAR MYTH about the Velvet Underground is that the band never sold many records, but everyone who bought one started a band. As exaggerations ...

IT'S A SUNNY morning in San Francisco but the hotel conference room is dark, empty except for an enormous table circled by chairs. One of ...

Call him the breeze. The originator of the Tulsa Sound died age 74 of a heart attack in California. ...

Tulsa, Oklahoma, and the Legacy of Leon Russell and J.J. Cale

THREE OF THE most prominent shapers of the Tulsa Sound have died over the past six years: J.J. Cale in 2013, Leon Russell in 2016 and the ...