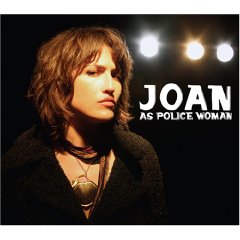 JOAN WASSER places a mug of steaming tea on the piano as she wanders onstage — a casual kick-off to this South Bank foyer space's ...

FOR JOAN WASSER, having to defer her debut due to viola playing commitments with Antony And The Johnsons, Rufus Wainwright and Scissor Sisters was probably ...

Goodbye and Hello: Joan as Policewoman

BIRDS ARE SHRIEKING through the trees all over Rushcutter's Bay. It is as if something violent and tuneful is going on at once as we ...

Three records rich in charm and melancholy. Give it up for Mélanie Pain, Joan As Police Woman and Anna Calvi. ...

Sandy Denny: The Battle Of Evermore

Report and Interview by Kate Mossman, The Word, April 2012

The Sandy Denny tribute show is expanding, a long-running fight to "give her songs a future". ...

JOAN WASSER, who's been recording under the name Joan as Police Woman for more than a decade, possesses a slow-burning, late-night voice that can handle ...