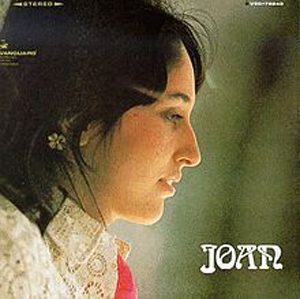 THIS ALBUM REPRESENTS Joan Baez's volte-face; after the years of diatribe and tireless dissemination of political views by every available channel, her records included, she's ...

The Queen of Folk on her stage repertoire; on the definition of folk; on the end of the Vietnam War; on her political activism – and letting it go; on her new album Play Me Backwards... and not paying taxes for weapons!

FIRST OF all, you SHOULD pronounce it "By-ezz"... Joan Baez. Though it's been twisted around a little as this folk-singing name is bandied about more ...

HOW MANY people thought that Joan Baez would be seen back in the NME Chart again, once 'We Shall Overcome' had faded into the distance? Not many, ...

Two Views on Baez, by Paul Simon and Dana Gillespie

A SMALL, dark, intense man from Greenwich Village (home of his folkship, Bob Dylan) came to my office last week and talked about Joan Baez. ...

JOAN BAEZ has turned school-marm. In a Californian town she has started an unusual "School For Non-Violence", where children turn up to sit in silence. ...

The Year That Folk Moved In

BOB DYLAN – the undisputed King of Folk. He causes as much controversy personally as do his records. ...

THERE WERE many things about Joan Baez, the folk singer, to give the impression that she was — if not slightly holier than most people ...

Joan Baez: A Study In Protest

WHEN THE curtains draw back and the spotlight silhouettes her against an empty stage, it's difficult to believe that slight, dark-haired Joan Baez is standing ...

Lovers of Baez folksong will be disappointed ...

The Isle of Wight Festival: 5 Days of Peace, Music and Love

2011 note: this report on the 1970 IoW festival is led off by Mick Farren but includes contributions by other, unnamed IT writers. The title ...

AS THE DUKE of American Rock Critics, I am afforded privileges and favors undreamed of by others in my profession. ...

LISTENING to this Joan Baez album – her first self-declaredly apolitical, decidedly commercial album since the days of folk rock – it is possible to ...

JOAN BAEZ PUTS it bluntly: "If I'd done another political album at this point, I'd have been bankrupt. I had no money left. So I ...

Joan Baez: From Every Stage

LAST AUTUMN, IN a move that marked a complete departure from previous practice, Joan Baez went out on the road in the States with a ...

THESE ARE heady days for Joan Baez. ...

JOANIE BROUGHT the audience right up on stage with her at the Odeon – two rows of them, mostly her guests, sitting rather self-consciously behind ...

JOAN BAEZ is 38 and has a lifetime of quotable quotes at her disposal from her plaintive remark to an audience in 1961: "The world ...

IN 1959 JOAN BAEZ walked out on stage at the Newport Folk Festival and touched off a wave of adulation that was to reach almost ...

Joan Baez: Speaking Of Her Dreams

NO DOUBT the desk clerk at the Registry Hotel in Universal City who gave Joan Baez her suite number was unaware that 1961 was a ...

WHAT EXACTLY is the most dignified role for the faded activist folk singer who wakes one morning to find herself five years older than the ...

A SIMPLE TWIST of Fate might have been a more appropriate title for this book, which is essentially a biography of Richard Fariña in disguise. ...

NOW OUT in paperback, this engrossing account of the intertwined lives of Bob Dylan, Joan Baez, Mimi Baez Fariña and Richard Fariña from the late ...

JOAN BAEZ hasn't written a song in 10 years, but she maintains an unerring instinct for choosing good material. ...