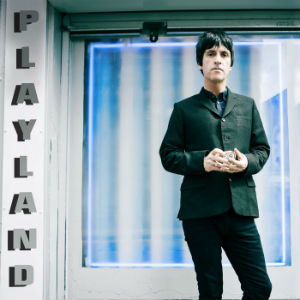 The The: The Boy Looked at Johnny

"Johnny (Marr) probably understands what I'm doing more than anybody else I've ever known. It's been an absolute revelation, melodically we're like twins..." So says ...

What Is Johnny Marr Playing At?

SINCE THE SMITHS split in 1987, MORRISSEY has gone on to bigger if not necessarily better things, while JOHNNY MARR has been living the 'have ...

THIS WEEK, THE THE'S WORLD TOUR FINALLY HITS BRITAIN. ANDREW MUELLER JOINED THE TOUR IN AUSTRALIA TO TALK TO MARR ABOUT HIS ROLE AS ROCK'S ...

Rock's eternal sideman steps into the spotlight with The Healers – and talks to Barney Hoskyns about life as an ex-Smith. ...

Joe Matera: Boomslang showcases a new sound for you that seems to be the culmination of all the different musical influences you've been exposed to ...

Johnny Marr on Boomslang and the Smiths

Hughes: The new album's been a long time in the making. Why the wait? ...

In a revealing interview, Johnny Marr and The Cribs discuss what went wrong with indie, why LA destroys creative thought, the curse of the lad, ...

Johnny Marr on the Smiths, Morrissey and putting politics back in pop

With the release of his first solo album The Messenger, the former Smiths guitarist talks about finally embracing his old sound, David Cameron and why ...

The former guitarist with the Smiths looks back to go forward. ...

Johnny Marr: "I've been in all my favourite bands"

Johnny Marr's five years in the Smiths have overshadowed his prolific output but the revered guitarist is finally stepping into the limelight. ...

Contrasting memoirs of life in the Sex Pistols and the Smiths from two charismatic working-class guitarists. ...

MY GOOD FRIEND Johnny Rogan, who died unexpectedly in January aged 67, was among the most prolific and acclaimed music biographers of his generation. Much ...