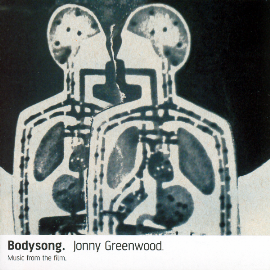 The Radiohead axeman discusses writing and recording the soundtrack to Simon Pummell's Bodysong: the way he used tape to record it; the musicians he collaborated with, including jazzman Gerard Presencer; the process of working to pictures and the arcane instruments he used, including the Ondes Martenot. Along the way he talks about playing Viola, and about being colourblind.

THOM YORKE may be the driving force and most recognisable face of Radiohead, but for many fans it's the guitarist Jonny Greenwood, the thin, twitchy ...

THIS IS THE soundtrack by Radiohead guitarist Johnny Greenwood to a unique film directed by Simon Pummell. It traces the journey from birth to death ...

Jonny Greenwood: "What do I do? I just generally worry about things…"

THE CAR PULLS into the courtyard of a small complex E of offices in the middle of a housing estate on the fringes of Didcot, ...