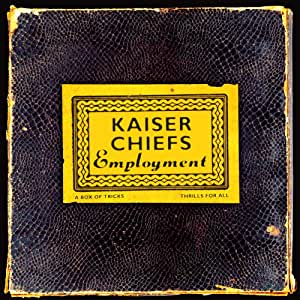 IT’S COMMON FOR bands to grow up in public these days, but rarely in the space of a single record. ...

LAST WEEK, Radio 4's Front Row applied itself to the thorny question of what label to slap on the current crop of young British guitar ...

Kaiser Chiefs: Hail to the Chiefs, as Americans say

The only British act appearing in Philadelphia will be Leeds lads, the Kaiser Chiefs. Caitlin Moran traded bons mots ...

Kaiser Chiefs: Back to the Future in Kaiserworld?

The backlash has begun for the Kaiser Chiefs, and their new song has no 'la la las'. But there's still a strong case for cheering ...

Kaiser Chiefs: This is the Modern Way

What happens when indie-rockers get together with a Grammy-winning composer? Kaiser Chiefs and David Arnold chat before their Electric Prom tonight. ...

Kaiser Chiefs: Off With Their Heads

IT MAY NOT be the kind of cause that inspires students to don fluorescent vests and coerce passers-by into signing direct debit forms, but it's ...

Kaiser Chiefs: Hail to the Chiefs

With their third album about to hit stores, the Kaiser Chiefs tell John Lewis about their dancefloor-filling new sound. ...

Kaiser Chiefs: Off With Their Heads

THIS SUMMER, Mark Ronson brightly told us that Kaiser Chiefs' new album, their third in four years and the first on his watch, sounded like ...

IN 2005, Kaiser Chiefs squeezed into a pop scene that was fixated on arch art-rockers. Today, the band are a neo-Britpop fixture, seemingly sent to ...

Kaiser Chiefs: The Future Is Medieval

LEEDS' KAISER Chiefs aren't a band immediately associated with innovation – their perky indie-pop has livened up many a festival with a series of "nah-nah-nah-nah-nah"-style ...

Kaiser Chiefs... but Under Your Control

Profile and Interview by Pete Paphides, The Guardian, 3 June 2011

Burned by past leaks, Kaiser Chiefs release their new album today after exactly zero buildup – and it might well be the world's first bespoke ...