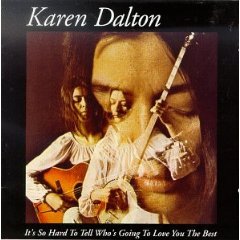 ALL KAREN DALTON has to do to create her own legend is sing. When she does, in a voice that belongs to no specific time ...

FROM THIS week's flood of albums come a few disappointing second LP's by some promising performers, a pleasant surprise from a talented newcomer, an outstanding ...

Karen Dalton: In My Own Time (Just Sunshine/Paramount)

KAREN DALTON is a folk legend whose name is spoken with reverence on MacDougal St., in Woodstock, in Texas, or anyplace else where she has ...

Karen Dalton: Who Loves You The Best Now?

Karen Dalton was a chronic recluse who died in obscurity. But now she's being hailed as one of the most original folk singers of the ...

Karen Dalton: In My Own Time

Jim Irvin welcomes the long-awaited CD reissue of the mysterious folk singer's only "proper" album, from 1971. ...

In Her Own Time and Ours: The Cult of Karen Dalton

THERE ARE VOICES and then there are voices. Sometimes the ones that move us most are those most on the edge: the ones racked with ...

Are You Leaving for the Country? Karen Dalton in Woodstock

FRED NEIL had returned to his beloved Florida by the early '70s, but from 1970 onwards Karen Dalton spent much of her time in Woodstock. ...