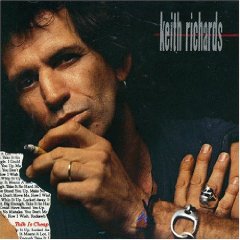 Retrospective and Interview by Barney Hoskyns, MOJO, May 1997

KEITH RICHARDS says he’d never thought of making a solo album until Mick Jagger announced that he didn’t want to tour to promote the Rolling ...

The Human Riff talks about his solo excursion with the X-Pensive Winos and making Talk is Cheap: sorting out the crack band with Steve Jordan, working with Bootsy and Maceo, and on being a frontman.

The Human Riff on Exile on Main Street, Gram Parsons, rastamen in the hills and his loathing of Oasis

WHY IS IT Keith Richard is the Stone who receives the least amount of publicity or fanfare? ...

The Sound of the Stones

ALL THROUGH THE night while they rehearsed for the European tour, Keith Richards stood there in a trance with himself, rocking slowly backwards and forwards, ...

Keith Richards: It's Only Rock 'N' Roll But I Like It

They All Tried To Play Reggae

...but can white rock and rollers sing the palm tree? wonders IDRIS WALTERS ...

Take me to the airportAnd put me on a planeI've got no expectationsTo pass through here again ...

Keith Richards: Keith And The Cockroaches Rip This Joint

Take me to the airportAnd put me on a planeI've got no expectationsTo pass through here again('No Expectations', Jagger/Richards) ...

An Outlaw At The Ritz: Keith Richards

In which Keef holds up the price of Smirnoff shares, little Marlon holds up his Dad, Anita Pallenberg holds up the interview, and CHRIS WELCH ...

WHAT BECOMES a legend most? So exactly how I'd imagined it was the scene that I wouldn't have dared make it up. Before we enter, ...

LIKE A POLITICIAN ON THE PODIUM, whistle-stopping across the boondocks on a flatbed, Keith Richards has his share of timeless bromides, comfortable answers his tongue ...

Out Of The Cage: An interview with Keith Richards

YOU CAN look Keith Richards in the eye and ask him if he's spent all his adult life divorced from reality. He stops, inclines his ...

An extract from Keith Richards: The Unauthorised Biography by Victor Bockris, first published in 1992. (Currently available as a paperback published by Omnibus Press, 426pp, ...

Keef: Exile just a shot away from Main Street

IT HAS become something of a cliche to say that Keith Richards is the Rolling Stones. ...

The Blues Brothers: John Lee Hooker and Keith Richards – It's a Two-way Thing

Profile and Interview by Nick Coleman, Time Out, October 1992

BOOM BOOM boom boom – gonna shoot you right down… The blues is always the blues, even when it's advertising copy. Right off your feet. ...

IN THE MIDDLE of the night, all blocks in mid-Manhattan offer a blank facade. But behind one particular stout steel door lurks a true temple ...

Midnight at the oasis...Actually, it’s 2 a.m. at the Hit Factory, but the mood is still calm as a desert breeze. ...

ON THE EVE of his forty-ninth birthday, the eternally delinquent Keith Richards was back in his hometown, at an 1800-capacity club, doing what he loves ...

That's Another Fine Messiah You've Got Me Into

John Lennon thought The Beatles were bigger than IT, some people think Elvis is/was IT and Michael Jackson seems to think he is IT. So ...

Keith Richards: How Do You Stop?

"DON’T BE MISLED!" shouts the faded 8" x 8" flyer propped up on a baby grand piano in the mansion Keith Richards is renting in ...

For 40 years, KEITH RICHARDS has been the soul of The Rolling Stones, a band he wouldn't let die even when he seemed to be ...

And Sitteth At The Right Hand Of God…

Jonh Ingham recalls a night in the presence of Keith Richards, April 1976. ...

"WHAT A DRAAAAAAAAAG it is growin' o-o-o-ld," Mick Jagger sang back in 1966. The rubber-lipped one became a sexagenarian earlier this year. Now it's Keef's ...

All my stories are treated with a certain sense of suspicion, but they're all fucking true. The story of how I fell in my library ...

How to be Keef: A User's Guide

WHAT GOES through the mind of a rock colossus as he falls from a coconut tree? Depends on your rock colossus, of course. So let's ...

Keith Richards' Life or How To (Not) Review a Rock God

I WAS LOOKING forward to the review of Keith Richards' new book Life in last Sunday's New York Times. ...

Long before Johnny Depp based Captain Jack on him, Keith Richards was just the pirate blues chief of the Rolling Stones. And not averse to ...

Keith Richards ready to roll back the years

As the Rolling Stones prepare to bring their 50th anniversary celebrations to Auckland, guitarist Keith Richards talks to Graham Reid. ...

The Time We Said Hello: The Day I Met Keith Richards

LIFE MAY BE a ghosted rock autobiography but it's much more than that. Credit to voracious reader Richards that in James Fox he hired no ...