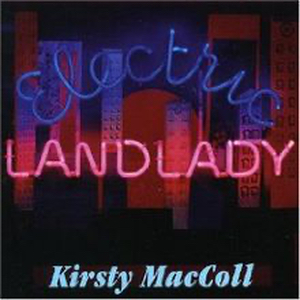 The singer-songwriter talks about her family background; early recordings and Stiff Records; working with the Pogues and Tracey Ullman; her new album Kite and being produced by husband Steve Lillywhite; meeting the Smiths; the position of women in the arts; songwriters she admires... and writer's block.

The much-missed singer-songwriter talks about, well, everything: her love of collaboration and those she has worked with; her family; the UK Poll Tax riots and politics; the epiphany of 'Good Vibrations' and so much more.

SANDY ROBERTSON finds yet another excuse to talk to young girls ...

SOMEWHERE IN BETWEEN the hype and the hit, when the noise has died down before it lives again, there's a spell of anticipation when the ...

Kirsty MacColl: A Chip Off The Old Block

"DON'T ASK A lot of questions about me Dad!" pleads Kirsty MacColl, flicking back the glorious swathe of hair dotted with tell-tale Red Indian braids. ...

Interview by Phil Sutcliffe, Q, May 1989

Kirsty MacColl is much in demand as the single-handed supplier of "Beach Boys" backing vocals to the discerning megastar. Now, with a bold and characterful ...

VERILY AND forsooth, but there is no mess sorrier than that made by the naturally supremely agile coming a clumsy cropper. ...

"SO THAT'S what you look like!" Kirsty MacColl exclaims, faced with an altogether too respectable crowd of 30 and 40-somethings, then launches into an eerie, ...

Singer Kirsty MacColl: Wry with a Twist of Laughter

DEPRESSION AND despair have their place in pop music, especially in English pop. In recent years, it's come through most tellingly in the shimmering sadness ...

ALTHOUGH I liked punk when I was growing up, my real adolescent obsession was with women who went pop. From Lene Lovich and Blondie to ...

Kirsty MacColl: Raging Against the Machine

There are many ways to describe Kirsty MacColl, but "female singer-songwriter" is not one of them, she tells Paul Sexton ...

KIRSTY MACCOLL first came to prominence as a solo artist during the early 80s, scoring Top 20 hits with 'There's a Guy Works Down The ...

A TIP. DON'T TELL KIRSTY MACCOLL SHE IS OUR FINEST FEMALE songwriter. Not even if you are besotted with Titanic Days, her latest and greatest ...

Kirsty MacColl: At home with Lauren, margarita and me

Still after that elusive No 1, Kirsty MacColl is the most dangerous of party animals: genius that drinks ...

Profile and Interview by Pete Paphides, Time Out, 18 March 1995

IT'S BEEN a long ascent for Kirsty MacColl. Over 15 years, she's toiled away unassumingly in pursuit of that elusive beast, the perfect pop song. ...

Kirsty MacColl: They Don't Know (Yet)

SHE'S BEEN AROUND for such a long time now, she admits she's a part of the furniture, "part of the rock 'n' roll consciousness." ...

Profile and Interview by Caitlin Moran, The Times, Spring 2000

WHEN IRS RECORDS gave Kirsty MacColl the best-of-treatment in 1995, the CD booklet overflowed with praise from famous fans and comrades. ...