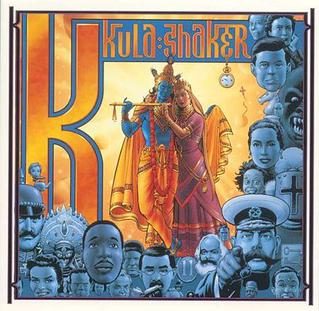 Kula Shaker and the New Psychedelia

BRITPOP’s ‘60s revivalism has brought in its wake all manner of cosmic hoo-hah. Hallucinogens have taken over from cigarettes-and-alcohol as the switched-on Englishman’s millenium-blues-buster of ...

I'VE JUST BEEN informed by that porridge-faced wanker, Simon Mayo, that Kula Shaker are "the next Oasis". Of course, the obvious questions don't even get ...

Kula Shaker: They Camelot, They Saw, They Conquered

They rave about King Arthur And The Knights Of The Round Table, elevated consciousness and all things mystical. They predict — oh lordy! — imminent, ...

JUST WHEN we’d accepted that Camden Town was the new Jerusalem and Noel and Liam God’s chosen, just when we declared we were glad to ...

Aerosmith and Kula Shaker On The Road

The raddled and the fresh-faced. The stellar and the starry-eyed. The seen-it-all and the wannabes. Perhaps, harsh to say, the past and the future. It ...

Interview by Chris Roberts, Vox, May 1998

Those mystical'n'magical types, KULA SHAKER are back, and this time they're watching what they say. Which is no surprise after their last round of foot-in-mouth ...

FOR A WHILE in 1996 it looked as though Kula Shaker were being watched over by the pantheon of gods and other bods portrayed on ...

Profile and Interview by Tim Cooper, The Independent, 24 September 2007

Ten years ago, Kula Shaker's Crispian Mills revealed an admiration for the swastika, and the band imploded. Now they're back, and the lead singer is ...