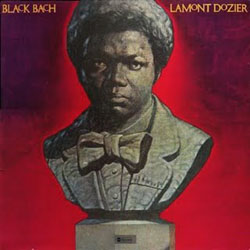 THE SUPREMES strolled into the crowded club where the Temptations were playing and instantly everyone in the room knew they were there. ...

HOLLAND-DOZIER-Holland may sound like a firm of solicitors, but they must rank among the most prolific songwriting teams in history. ...

FAMOUS WRITER-producer Lamont Dozier neither wrote nor produced this album, so it represents a break from his Motown and Invictus work. There isn't much novelty ...

WHEN, AFTER all those years languishing in the background boy's shadows, things started to move for Lamont as an artist, they moved with lightning speed. ...

WHEN THE time comes to chronicle the names of some of the top producers and songwriters of the sixties and seventies, there is no question ...

....but he's got a good ear and keeps cookin' up the goodies! David Nathan investigates the art of culinary composing, according to Lamont Dozier. ...

Lamont Dozier is putting together a show to promote his new album and these will be his first live gigs for some 20 years! ...

HE LOOKS tired now, as if all that time spent playing, writing and dreaming up words and sound had finally drained him of life and ...

They were pop's most prolific hit factory, producing 70 US Top Ten singles and 20 No. 1s. On the 45th anniversary of Motown, we meet ...