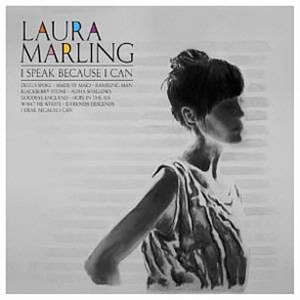 IN 2006, LAURA Marling, a 16-year-old Brit from Hampshire, started heading to London every week, looking for clubs to play and flats to crash at ...

Laura Marling: 'My songs are not pretty'

IN A RECENT POSTING on a music website, one of Laura Marling's growing army of fans described her output as "pretty folk songs about boys". ...

DESPITE ALL HER best efforts to stick a spike in the wheel of success, Laura Marling is fast-becoming the most talked-about young singer-songwriter of recent ...

Laura Marling: I Speak Because I Can (Virgin) ****

ON I Speak Because I Can, Laura Marling continues to demonstrate why she's such an exciting singer-songwriter. ...

A Dylanesque troubadour who's knocking on heaven's door ...

Whenever power emerges, there's a sense of innocence lost — Laura Marling: Once I Was An Eagle (Rough Trade)

Her voice, once so English, has turned into a slip-slidey American lilt, half-speech, half-jazz, frequently yoyoing to a deeper register... In Marling, we're watching an ...

Laura Marling: Once I Was An Eagle

WHEN LAURA Marling announced that her follow-up to 2011's A Creature I Don't Know would be a mostly solo acoustic affair, one may have been ...

"I'M JUST A horse with no name," sings Laura Marling on 'Warrior' — slyly invoking the 1970s soft-rock hit by America while conjuring a wanderer ...