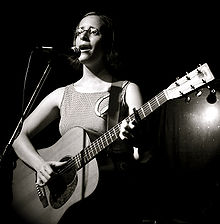 LESS THAN TEN YEARS AGO, Laura Veirs was struck on being a geologist. Then, exploring a remote desert corner of northwest China with a bunch ...

Laura Veirs: The Triumphs And Travails Of Orphan Mae

First UK release of Veirs' second album, in wake of hugely acclaimed Carbon Glacier. AFTER 1999'S PUNKISH, eponymous debut, this was where Veirs began to learn ...

THE RECENTLY COINED "AMERICANA" GENRE that Seattle songwriter Laura Veirs inhabits is underpinned by a yearning to reconnect with the land. In Veirs's case, this ...

Laura Veirs is bringing her irresistibly oddball folk-rock to Europe. And, Robert Sandall finds, she's doing it the hard way. ...

"WE HOPE YOU LIKE our embroidered outfits," begins Laura Veirs. "We went that extra mile." She is referring to her floral dress and the suits ...

LAURA VEIRS EXISTS in a universe that runs parallel to the mainstream music industry, if not directly counter to it. With six studio albums to ...

Laura Viers came to folk via punk, is geeky yet cool, young but experienced and both delicate and tough. John Lewis meets her. ...

A set dominated by music from her latest album July Flame did not disappoint fans of the Oregon folk singer-songwriter ...