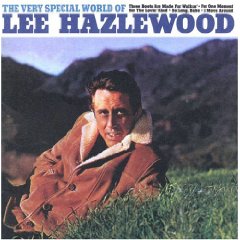 From Arizona and Duane Eddy to L.A. and Nancy Sinatra: three hours of yarns and reminiscences from the irascible Lee Hazlewood

'Everything about Nancy and her Mother is love, love, love' says 'Boots' writer Lee Hazelwood ...

NANCY SINATRA, newly-famous daughter of a famous father, descended on Britain last week in the biggest blaze of publicity since the third of the Beatles ...

LEE HAZLEWOOD is the 38-year-old one-man army and musical talent who turned Nancy Sinatra into one of the world's most popular recording artistes — and ...

Lee Hazlewood: We Only Record For The Fun Of It

THREE YEARS ago, Lee Hazlewood tired of writing and producing Nancy Sinatra – split to Stockholme to carry on his interest in film work – ...

HOW DOES this grab you, darling? Nancy Sinatra, in her infamous black leather boots and a perfect blonde bouffant, centre stage for the first time ...

Profile and Interview by Barney Hoskyns, MOJO, May 1999

ON A PERFECT Florida afternoon in late February, Lee Hazlewood is wedging himself into a large grey couch and eyeing a rather sad plate of ...

Profile and Interview by Andrew Smith, The Observer, 13 June 1999

NEW YORK CROWDS don't get much hipper than this. The women look either like a young Patti Smith or Marianne Faithfull circa Girl On A ...

He sings, produces, writes and arranges, and had no. 1 hits with Nancy Sinatra. Kieron Tyler meets the legendary genre-straddling icon. ...

Lee Hazlewood: 13/The Cowboy And The Lady (Smells Like)

LEE HAZLEWOOD is not one of those cult objects who, on closer inspection, looks like a frail talent protected by decades of vinyl scarcity and ...

IT'S BEEN A hellish few days for Lee Hazlewood. Three days into a four-day promo frenzy of our nation's fair capital, and everyone after a ...

BARTON LEE Hazlewood remains the cult artist's cult artist, an American maverick who's operated by his own supremely offbeat rules ever since producing Sanford Clark's ...

Best known for reviving Nancy Sinatra's career with 'These Boots Are Made for Walkin'', Lee Hazlewood was a highly unorthodox record producer. An epic box ...

The following extract takes place within a few minutes of my first meeting with Lee Hazlewood in April, 1999, at New York's Grand Hyatt Hotel, ...