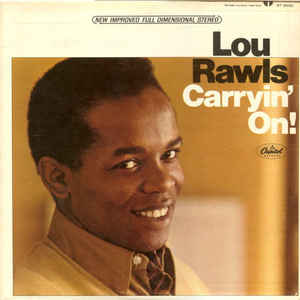 THEY CALL IT Blues but really it's a large spoonful of mother earth. All heaped up and occasionally spilling over. When it spills over it's ...

LOU RAWLS is an energetic singer with a fairly rich voice and a hip sort of style influenced by blues, gospel and old and modern ...

ASK LOU Rawls, who performed to a full house at Masonic Auditorium Sunday night, to tell you the most exciting point in his career and ...

Live Review by Penny Valentine, Disc and Music Echo, 25 May 1968

Lou Rawls And The Philly Pay Off

Lou was beginning to feel he'd never happen big in Britain but his CBS-Philly tie-up has paid a big divvy. Now he's planning a trip ...