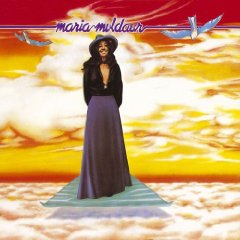 SALVATION HAS come down from the heaven's in the shape of Maria Muldaur's third album which finds the artist growing in leaps and bounds, moving ...

I CONSIDER it unfair, even immoral, for Maria Muldaur to look and sing so well. I mean, a reviewer like myself can get pretty worked ...

Maria Muldaur: A Singer Who Has the Pipes

LOS ANGELES — "Not that many people are issued good voices," said Maria Muldaur, curled up on her hotel sofa on Christmas Eve, "That's probably ...

Stephen Stills Gets Himself Together ...

MARIA MULDAUR sings of the joy of being a woman — and it's propelled her album into the charts. JACOBA ATLAS reports from Los Angeles. ...

THE GRATEFUL Dead and its good vibes competed with some decidedly bad ones from a too active, too physical security force at the Hollywood Bowl ...

THE AUDIENCE is expectant, the music strident, the voice rich and full-throated and sensuous. It's San Diego, the first stop on Maria Muldaur's 30-day road ...

MARIA MULDAUR'S got class – no argument about it. It may have been a long, hard climb, but she is now receiving the attention she ...

MARIA MULDAUR is a tease. That sexy helplessness she exudes by asking 'Won't You Feel My Leg' is only half the story. She'll turn the ...

Profile and Interview by Rob Partridge, Melody Maker, 10 May 1975

ENCORE time at Stony Brook, Long Island. Maria Muldaur had just finished an impressive set and the kids were yelling out for more of the ...

MARIA MULDAUR makes her first appearance in London with a week at Ronnie Scott's club — an unusual, even modest debut, one might think, for ...

THE TROUBLE with Maria Muldaur is that she is so Goddamn talented it could make you sick. At Ronnie Scott's London, she was all the ...

Maria Muldaur: The Effect Is Underwhelming

"BECAUSE OF the eclectic nature of her thing Maria goes through a lot of different styles – that's her thing, that's what she does, that's ...

THE FIRST time I saw Maria Muldaur live she was magnificent. Which is unfortunate because it set a precedent she could never follow short of ...

DRESSED IN a tight-fitting black lacy sweater, blue jeans and wall-to-wall confidence, Maria Muldaur sauntered on to the Bottom Line stage and made everyone feel ...

MUSICIANS WHO return after a hiatus as long as Muldaur's – since the confusion of Sweet Harmony – face several problems, not least over-effort. It's ...

"IF YOU THINK about it," Maria Muldaur remarked during a recent showcase for her new blues album, Fanning the Flames, "a tarantella is really just ...

Maria Muldaur's solo debut: among the best albums of any era Long, long ago, a collaboration of producers, musicians and a singer ...

WHEN SINGER Maria Muldaur takes the stage at this week's Detroit Jazz Festival, it will be a culmination of a chain of events that run ...