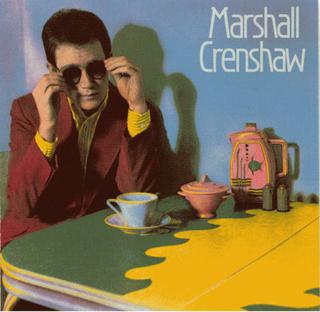 MARSHALL CRENSHAW is a believer. A guitarist and singer who draws from the classic, lean rock 'n' roll of the late-'50s and mid-'60s, he believes ...

"I don't try to hang anybody up or get anybody over-involved in my hang-ups. I don't try to bore people with my problems. The main ...

ELVIS COSTELLO LOVES HIM... BUT NOBODY ELSE HAS EVER HEARD OF HIM! WE BRING YOU MARSHALL CRENSHAW – THE MOST ANONYMOUS NAME IN POP. SNAP: ...

MARSHALL CRENSHAW'S first album was like a tuneful adaptation of an ad from the Voice's personal/classified columns: Lookin' for a brand new lover, a cynical ...

CRENSHAW SINGS like a less nasal John Lennon (whom he portrayed in Beatlemania) with the rough edges smoothed off, becomingly betrays the influence of all ...

Sorry, Aretha, but maybe there is such a thing as too much respect. Since his pop-heaven debut LP in 1983, Marshall Crenshaw has been bowed ...

ON THE first date of an East Coast mini-tour, Marshall Crenshaw and Amy Rigby are playing things semi-safe: Park West is a club sandwiched between ...

IN 1978, Marshall Crenshaw played John Lennon to Glen Burtnik's Paul McCartney in the touring company of Beatlemania. 35 years later the two men were ...