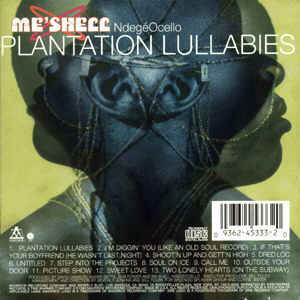 WHAT A DIFFERENCE a year makes. Twelve months ago bassist and band leader Me'Shell NdegeOcello's debut album, Plantation Lullabies, had just been released by Maverick. ...

Outsider 101. Teacher: Ndegeocello. At the Whisky, the singer embraces the essence of what it's like to live as a target. ...

FUNK OUGHT to be its own reward, but Me'Shell Ndegéocello isn't buying that right now. Perhaps embarrassed by the commercial success of John Mellencamp's rollicking ...

IT WOULD BE hard to think of two female singers more different than Alison Krauss and Me'Shell Ndegeocello. Krauss, a straight European-American from the Midwestern ...

Review by Kandia Crazy Horse, The Village Voice, 1 May 2002

Meshell Ndegeocello talks to John Lewis about the Rolling Stones, the Devil and Christopher Hitchens. ...

'WEATHER' ISN'T the first Meshell Ndegeocello single to fall into the category of "freak folk," but the album of the same name is her first ...

They are "the glue" that cements the music, the mysterious put-upon souls plying their crucial trade in a cloud of dry ice by the drum-riser. ...