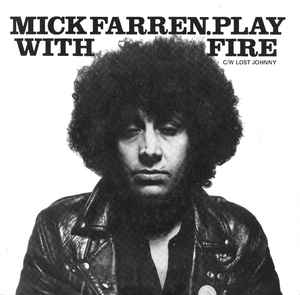 WATCH OUT, world — Mick Farren is out to accomplish with Shagrat what he couldn't quite get together with the Deviants. ...

MICK FARREN, in case you didn't know it, is a rock journalist and author who very occasionally makes records. Remember The Deviants' amphetamine hippy-boogie, or ...

Mick Farren: Is There Life After Dingwalls?

DESPITE THE SILK shawl wrapped about its neck to prevent its head falling off, there is a dignity, a pride, even a sense of all ...

ONE of the less predictable events of this year has been the re-emergence of Mick Farren on the productive rather than critical side of rock'n'roll. ...

The Pen Is Mightier As A Chord

...sometimes. The rock critic as musician. By Sandy Robertson ...

An Interview with Mick Farren

Mick Farren on the Deviants, Fantasy Fiction and Blowing Things Up

PUBLISHING MOGUL Felix Dennis was staring at the Caribbean Sea a few months ago, sucking down cocktails with fellow gazillionaires at Basil's Bar on the ...

Mick Farren: Give the Anarchist a Cigarette ...

We Have Lift Off!

In less than one year, London's UFO (pronounced "you-foe") club became the nocturnal haunt of the '60s counterculture, gathering place for the Beatles, Stones and ...

You Say You Want A Revolution: Mick Farren Looks Back

RBP contributor Paul Moody interviewed Mick earlier this year while researching his new book Search For The Lost Chord: Looking For The Spirit Of Rock'n'Roll. We're ...

Mick Farren, who died onstage in London on Saturday, was a "living banner for the psychedelic left". He was also a friend who joined me ...

Memories of Mick Farren: An entertaining afternoon in West Hollywood and a champagne-drenched night in Islington

Book Excerpt by Charles Shaar Murray, 'Elvis Died For Somebody's Sins But Not Mine', Spring 2013

MICK FARREN IS a man of many parts, an impressive number of which are still working despite the natural wear and-tear incurred by decades of ...