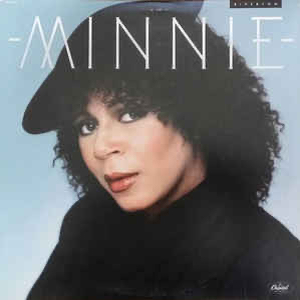 The trilling songthrush talks about playing Las Vegas; about live arrangements; about her collaborators; her stage background; on relationships and self-awareness; on songwriting, and at some length on her struggle with breast cancer, and winning the American Cancer Society's Courage Award.

LOS ANGELES – Along with many of the stars and hopefuls at Chicago's 1971 Black Expo, Minnie Riperton waited patiently backstage to approach the blind ...

Minnie Riperton: From a whisper to a scream

WHEN A RECORD company brings the release date of an album forward by almost three months it's a sure sign that the artist involved is ...

MINNIE RIPERTON is as fizzy as a soda bottle shaken on a hot summer day. Life, it is reassuring to know, can be enjoyed even ...

As Minnie Riperton hits No. 1 in America Penny Valentine reports from New York ...

Minnie: rather less than angelic ...

...or something like that, so it says here, in this double-date interview with Mss MINNIE RIPERTON and MILLIE JACKSON ...

Minnie Riperton: 'Minnie Bird', The 5 - Octave Soprano Is Back

MINNIE RIPERTON'S press bio reads: "The lady with the five and a half-octave coloratura soprano voice is a star". Without taking away from her talent ...

MINNIE RIPERTON has a new album out and it marks her debut set for Capitol Records. She's feeling justifiably pleased with it and has good ...

2008 introduction:This interview was David's second face-to-face conversation with Minnie; at the time, she was dealing with health challenges – in 1976, she had been ...

Van McCoy, Minnie Riperton Cut Down in Their Prime

WHEN LOWELL George died, a kind of half-hearted black joke about 'the season starting' was popular on many lips. In the brief space since his ...

THIS WAS going to be a happy, triumphant comeback album... ...

Minnie Riperton: 10 of the best tracks

She had a five-octave vocal range, inspired Stevie Wonder and gave birth to Maya Rudolph – the tragedy is that this huge musical talent died ...