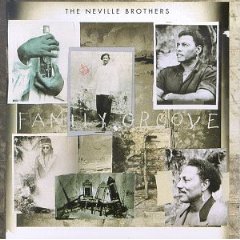 It's Hard to Read the Meters

Report and Interview by Joel Selvin, San Francisco Chronicle, 1 May 1977

"IF WE'RE SO good, how come we ain't rich?" reads the caption in The Figaro, New Orleans' underground newspaper, accompanying the story detailing the demise ...

The Neville Brothers: A Family Affair

THE NAME of Neville is synonymous with the whole New Orleans sound. The eldest brother, Art, has invested more than twenty years into the music ...

Neville Brothers: The fire this time ...

One City And Its Romance With R&B ...

The Neville Brothers: Fiyo on the Bayou (A&M)

WHAT THE hell is a music that thinks of itself in a perpetual present tense going to do with a rapidly accumulating history? Performers like ...

The Neville Brothers: Live At The Shaw Theatre, London

THE NEVILLE Brothers are an institution whose time would seem to have come. Four brothers from New Orleans, their contribution to Crescent City music over ...

The Neville Brothers: A Tiptoe Through The Tchipitoulas

Fame has never courted the NEVILLE BROTHERS, but RICHARD GRABEL is pleased to report that the veteran culcha soulsters are at last getting their due. ...

Profile and Interview by Geoffrey Himes, Baltimore Sun, 5 May 1985

NEW ORLEANS has Nevilles like Washington has Kennedys and Kent has Cowdreys. Notwithstanding claims on behalf of the Marsalis clan, the four brothers Neville represent ...

WHAT a nice surprise: a double album of material from what is virtually a one-family history of New Orleans R&B, tastefully packaged and annotated by ...

The Neville Brothers: Funky but Chic

Neville Brothers Bring Their Angelic But Underrated Sound To Hopkins

MAY DAY WAS the last day of this year's New Orleans Jazz and Heritage Festival, and the honorary slot of the last set was once ...

The Neville Brothers bring it all back home. ...

The Neville Brothers: At Last The Legend Lives

Profile and Interview by Mark Cooper, The Guardian, 5 October 1989

The Neville Brothers, long held in awe by fellow musicians, are finally selling records. Mark Cooper on the London-bound band. ...

David Toop meets Daniel Lanois, the hit producer of albums for U2, Peter Gabriel and Bob Dylan, now a performer himself on record and visiting ...

THE NEW ORLEANS Jazz & Heritage Festival makes most British music festivals, even the Readings and Glastonburys, look a bit sick by comparison. It's not ...

NEW ORLEANS is a difficult place to characterise, at least as far as its music is concerned. Ernie K-Doe, the veteran R&B singer and one ...

AFTER SPENDING A decade producing four albums for as many labels, the four Nevilles finally got the bit between their teeth with the Daniel Lanois-produced ...

SHOUDN’T IT BE A CLINCH TO PRODUCE a consistently breathtaking Neville Brothers album? Wouldn’t one have only to hand Aaron Neville a collection of worthy ...