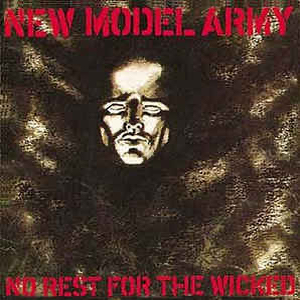 BRADFORD IS a city of dead mills, lousy poets, psychopaths and pigeons. There's a lot of shit about, including a thick morass of cotton wool-gobbed ...

PUNK IS DEAD in letter but not in spirit. That is the message from a new school of groups who do not make videos and ...

New Model Army: Between the Wars

Are New Model Army really as ugly as they say? Jack Barron flutters his eyes and confesses. ...

On the eve of their British tour, and with 'Stupid Questions' their highest-ever chart entry, New Model Army take time out in Strasbourg to explain ...

Interview by Phil Sutcliffe, Q, May 1989

There are few more devoted disciples than the followers of New Model Army. For many it's a full-time job — hitchhiking to every concert, home ...

FORMED IN 1980, New Model Army, an English rock trio, has marched throughout Europe and America over the past nine years leaving legions of fans ...

Justin Sullivan's Army Of One

The West Yorkshire folk-punk great and New Model Army frontman emerges from the pandemic with a brilliant new solo album. ...