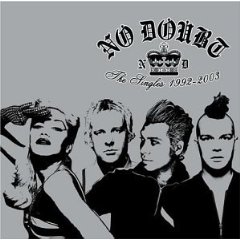 The hottest superbabe in rock is here! She's Gwen Stefani, she fronts million-selling US sensations No Doubt, and once she's had her eyebrows plucked, she'll ...

• What's with America, eh? First they make Bush megastars, then they take our beloved ska, add saccharine to it and sell it back to ...

No Doubt: Who's That Girl?

"GETTING POPULAR IS STRANGE. THERE'S NO WAY OF EXPLAINING HOW IT FEELS... UNTIL IT HAPPENS TO YOU!" ...

No Doubt: Gwen in doubt

GWEN STEFANI'S SURVIVED A FRIEND'S SUICIDE, A FLOP RECORD, AND A BAND THAT WAS SET ON SELF-DESTRUCT. NOW SHE'S AN INTERNATIONAL SEX SYMBOL WITH A ...

No Doubt thought they were READY for anything. Then they got FAMOUS and suddenly their singer was no longer just A GIRL. ...

Why has Beavis & Butt-head country gone mad for NO DOUBT's peculiar brand of ska-pop-funk-type-thing? And how has singer Gwen ended up as a feminist ...

No Doubt: been there, done that, sold this much ...

Over And No Doubt?

No Doubt have went from garage band to worldwide stardom. But is it the end of the band as we know it? We join them ...

No Doubt: House of Blues, L.A.

California's No Doubt stay up with the pack, while P.O.D. have seen God. David Sinclair is awed ...

Gwen Stefani and No Doubt are back. But maybe not for very long. She talks to Caroline Sullivan ...

How did this garish gang of Madness-loving Californians end up selling 10 million albums? Welcome to No Doubt's turbulent tale of teenage suicide, broken love ...